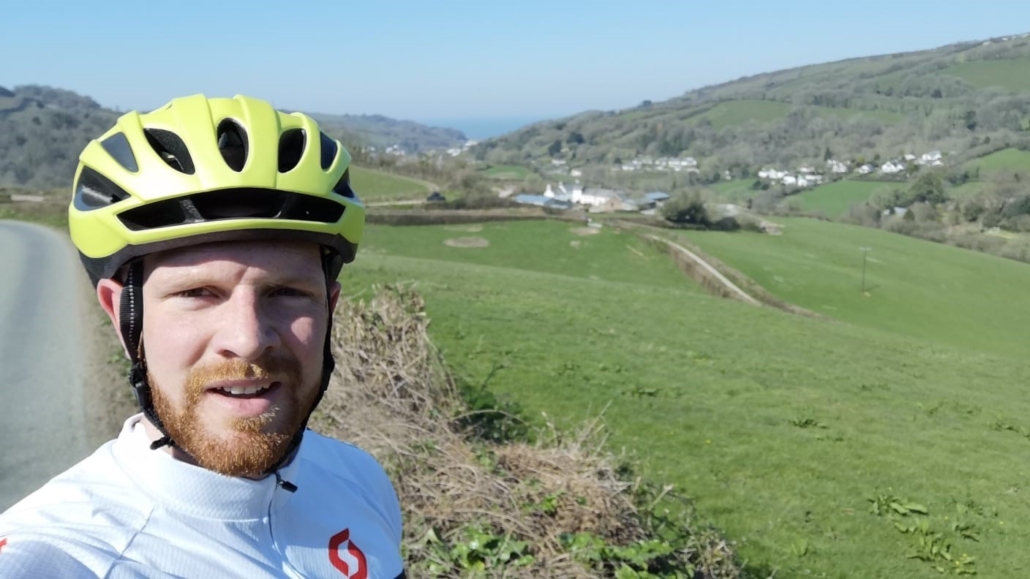 At Active Devon, we hear some inspiring stories of how being active, or getting active for the first time, has changed peoples’ lives for the better. From controlling cronic pain to relieving anxiety, we have no doubt about the life changing qualities of movement and physical activity. However, Luke’s story of resilience in the face of relentless adversity really stands out.

Luke Rigler has always led an active life. From an early age he was fortunate enough to learn to ride a bicycle. Who would have known that over 25 years later, that simple skill, that he learned in his family’s garden, would play such an important, potentially lifesaving, role.

Luke’s life was turned upside down in November 2017, when he collapsed during a weight training session at his Army base. At first, he thought it was just some serious de-hydration, following a particularly boozy weekend. Instead, after many tests and a consultation with the Army doctor, he was diagnosed with a brain tumour.

Things moved quickly from there. After months of trips back and forth to see specialist after specialist, it was decided that the best course of action was to operate on the tumour. In May 2018, Luke underwent major surgery and the tumour was removed.

From August to October of the same year, Luke underwent extensive Radiotherapy to keep what was left of the tumour at bay and to stop it growing back. Throughout his recovery, it became clear that his active and healthy lifestyle played a huge part in his body’s ability to fight the tumour. “I keep fit to give myself the best possible chance of getting better”, he says. And this is what he’s done; he’s kept fit and he’s kept fighting.

Unfortunately, not long after his operation, Luke was medically discharged from the Army losing his dream job as a helicopter technician. It’s devastating to think that something that he had worked so hard to achieve was taken away in an instant. None of this he could control. But here comes the moral of the story.

Luke refused to focus on what he couldn’t control, and instead focused on his recovery, drawing positives from other areas of his life, and above all working on things that he could control. After his operation, Luke was unable to drive for 12 months, and with that he lost a sense of freedom he once took for granted.

However, Luke continued to get better, day-by-day, and eventually found a new job, at home in North Devon. After a short time commuting by bus, he felt confident enough to cycle to work and quickly realised he was not only saving money, but also time. Before long, he was beating the bus on every occasion.

Luke had his freedom back, and he began to see cycling as not only a means of staying fit, but also a brilliant mode of transport. He could go anywhere he could previously go in his car, as well as some places he could not. Everything was starting to look up again. Then 2020 hit.

The global pandemic that has affected just about everyone on earth and was to throw another spanner in the works for Luke too. Just months into his new role, Luke was made redundant. With no job, and tough restrictions on social interaction and exercise, he was dealt another cruel blow.

The tumour was growing back. Devastating news for everyone around him, let alone Luke himself. But true to form, Luke wasn’t going to let a string of bad luck get the better of him. Once again using exercise as his focus. Initially, Luke would go for a run or cycle on his own.

Then, when restrictions started to lift, he found that a social bike ride along North Devon’s Tark Trail was a great way to communicate and socialise. Instead of the many Zoom quizzes he had become accustomed too, the fresh air, the movement of body, and cycling in particular, helped Luke manage his mental health at a time when everything else felt tough. For everyone, not just him.

His family and close friends relish the opportunity to go for a walk, run or bike ride with him. You can’t help but be inspired by his sheer determination and positivity in a particularly difficult time. Luke reminds everyone he meets, to appreciate the simple things in life and to keep moving forward.

At the time of writing, Luke is eagerly awaiting news of a new date to remove his tumour. As with many throughout the world, his operation has been delayed numerous times due to the pandemic. He’s looking forward to starting a new job working in the NHS, riding to work and home again, and going for a ride with his family and friends once again.

Discover More About How You Can Get Cycling

If you have been inspired by Luke’s incredible story and would like to discover more about how you can get cycling, check out our dedicated Get Cycling page. Here you’ll find lots of information, resources and top tips for beginners, families and commuters.